Date
Brief Description
The sitter has been identified as Mere Te Kaehe Karetai, who was first photographed by the artist's father William Hodgkins in the 1880s. Frances Hodgkins painted a portrait from one of her father's photographs in 1896, of Mere standing in a doorway wearing a headscarf. The family lived at Otakou on the Otago Peninsula. There is a later photograph of Mere Te Kaehe in which she is wearing this cloak, but she is looking down rather than looking at the viewer.
Hodgkins produced a series of watercolours of Maori girls, once writing to her sister in Wellington asking for any photographs of Maori.

Inscription
Frances Hodgkins had gifted the work to Lorna Styles.She visited Corfe in the 1940s and asked Hodgkins to sign the work, which she did Inscribed lower l. in red chalk, 'Frances Hodgkins/ painted /New Zealand 1900'.
Framing notes 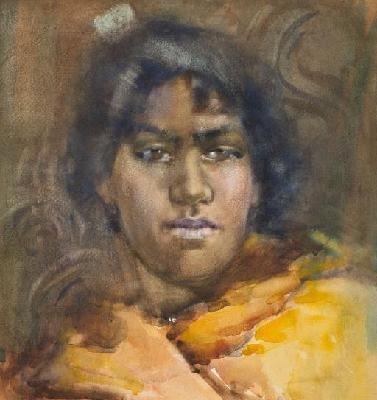