Date
Brief Description
When Frances Hodgkins stayed in St Tropez in 1931, she produced a series of drawings and paintings, many of which she sent back to her dealer, Arthur Howell, in London. Red Jug, (also in the Gallery collection) was included the following year in an exhibition of the 7 and 5 Society, of which Hodgkins was a member. Spanish Jars, however, was not displayed until 1935. The Gallery also owns the preparatory drawing Untitled (Vases in an Alcove) 2005/32/1 for Spanish Jars, which was originally lent to the Gallery in the 1950s for an exhibition by artist John Piper. It had remained in Hodgkins’ possession until her death. At first glance, Spanish Jars looks very unlike Red Jug which is also in the Gallery’s collection, but there are subtle indications that it was begun at the same time, but then worked and reworked in Hodgkins’ studio until included in her very important Leicester Galleries exhibition of 1935. Most importantly, if you look carefully at the sky glimpsed through the window, you will see that it too is painted in horizontal stripes, a compositional technique that Hodgkins used in a number of her St Tropez paintings. Future technical analysis will allow us to discover how her style of painting evolved over the following years. 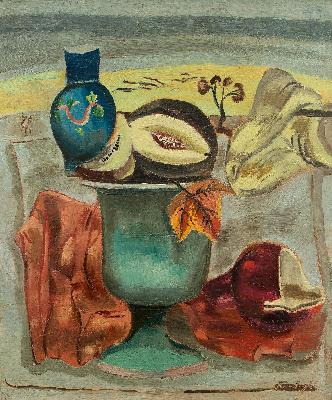